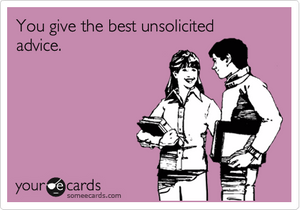 The other day, I was stopped on the street by an acquaintance. We politely chatted about their home renovation project and how my post office job was going. Then they asked "What about your music?" I explained how the performances are slowly starting up again, and that I am in the administrative phase of putting out my new album. They inquired about where I recorded. As I replied I noticed they were getting agitated.

They criticized my choice of hiring a Producer, saying "you don't need a producer. You need to control your own music." Then they criticized my songwriting, saying that it wasn't "quite there" and one song really "turned them off". Then they asked "Are you playing county fairs? Are you live streaming every week? Hosting a podcast?" And when I said no, they shook their head in disapproval. I couldn't do enough for this person. No matter how much work I was putting in, there would always be more that I SHOULD be doing. It felt like a runaway train of judgement aimed right at my ego. I was starting to feel an anxiety attack coming on.

I knew that I had to make a choice:

This was not the first time I'd encountered someone aggressively offering unsolicited advice. Often I believe these people have good intentions, but I also think I'm acting like a mirror. They are throwing these criticisms at me, but it reveals more about their own insecurities and regrets. They often know very little about me. Possibly having only heard a few songs or seen me one-time in concert.

Thankfully, I was able to tell this person that I was feeling overwhelmed by our conversation and needed to change the subject. That seemed to release some of my anxiety and the conversation quickly came to an end.